Yield farming has been one of the most successful activities in the Decentralized Finance (DeFi) space. The sheer number of platforms that allow for yield farming to be done bears testimony to this fact.

But the thing with most of the platforms allowing you to do yield farming is the risk associated with the activity. We are mainly talking about the impermanent loss that might arise due to the volatility of the market (and the governance tokens of the platforms). I don’t mean to say that impermanent loss is not a possibility on Anchor. I’m just saying that it has systems set in place to ensure that your investment stays virtually unharmed regardless of it.

That is just one of the many problems the Anchor protocol aims to resolve, allowing you to farm as much as you want without worrying about the consequences.

But before we talk about how you start with yield farming on the Anchor platform, let us quickly discuss what the Anchor protocol is all about!

What is the Anchor Protocol?

The Anchor protocol is a savings protocol built on the Terra blockchain. The protocol is one of the few that offer users a stablecoin savings product capable of providing stable interest rates to depositors.

In the few years that have gone by recently, we have seen a meteoric rise in the number of Decentralized Finance (DeFi) applications. It seems like a new application is launched every other day covering a wide range of use cases. Some of these use cases are collateralized lending (a great example for which would be Compound), decentralized exchanges (Uniswap is the first that comes to mind for this), and prediction markets (like the renowned platform Augur).

But despite this unforeseen rise, DeFi has tried, yet failed, to produce a savings product that is simple, convenient, and robust. This is where the Anchor protocol comes in with a product that has the potential to appeal to the masses. We’re talking about its principal-protected stablecoin savings product.

How does it do that? Long story short, it uses the block rewards that get produced using the assets you provide them for borrowing the stablecoins. So when you submit some assets in return for the stablecoins that you borrow, your assets don’t sit around idly. Instead, the block rewards that are gained on those assets are used by the platform to provide you with a stable interest rate.

Read more: What is Anchor Protocol? An Introduction to Terra’s New Savings Protocol

How to do Yield Farming on Anchor?

To yield farm on Anchor, you need to create a Terra Station wallet before anything else. And you need some UST in your wallet. Luckily for you, we’ve covered how you can do both in the following article:

Once you’re on the Earn tab, you’ll see some pieces of information along with the option to withdraw and deposit UST. What you have to do here is deposit some UST and let that generate passive income for you. At the time of writing this article, the yield offered by Anchor was 19.64 APY. Regardless of where you live, this is much higher than the interest rates any bank would offer to you on your savings.

And the best part is that you don’t have a minimum or maximum threshold for your deposits. Once you’ve decided on how much you wish to deposit, hit the Proceed button. This would open a popup in the Terra station extension window where you would be asked to confirm the transaction. And that’s about it. With that, you’ve made your first UST deposit which is going to earn you a yield of 19.64 percent every year.

Please note that this was the yield at the time of writing the article. The numbers you would see might vary.

Against your deposit, you would receive aUST tokens which you can use to earn on the Anchor platform. Whenever you choose to withdraw your UST tokens, you simply need to provide these aUST tokens to the platform and it’ll give you your total earnings.

Depositing your money on Anchor has its own benefits. As mentioned earlier, the profit margin (or ROI, if you see it that way) is much higher than what most banks have to offer. And the risk is low since the cryptocurrency we deal with here, UST, is a stablecoin that is pegged to the US dollar. So, you don’t really need to worry about price volatility. In fact, you don’t need to worry about anything since the entire process is pretty simple.

How to Earn Money from bLUNA on Anchor?

While depositing UST is a great way to earn some money on Anchor, what if you don’t have as much UST as you would like to invest? If that is the case with you, you could always borrow some using bLUNA as collateral.

To do that, you need to head over to the next tab, “Borrow”. If you have some bLUNA lying around, you could scroll down to find the section that says “Collateral List”. Out here, you would need to select bLUNA (Bonded LUNA) by clicking on the button that says “Provide”. Based on the number of bLUNA tokens you deposit, you would be able to see how much UST you are eligible for.

If you’re happy with it, click on the “Proceed” button and get your UST tokens. Once you have the tokens, you can deposit them using the method we discussed earlier and get returns on them.

Now, you might not have bLUNA lying around. So what do you do? You would need to bond LUNA tokens. Doing this would give you bLUNA tokens. 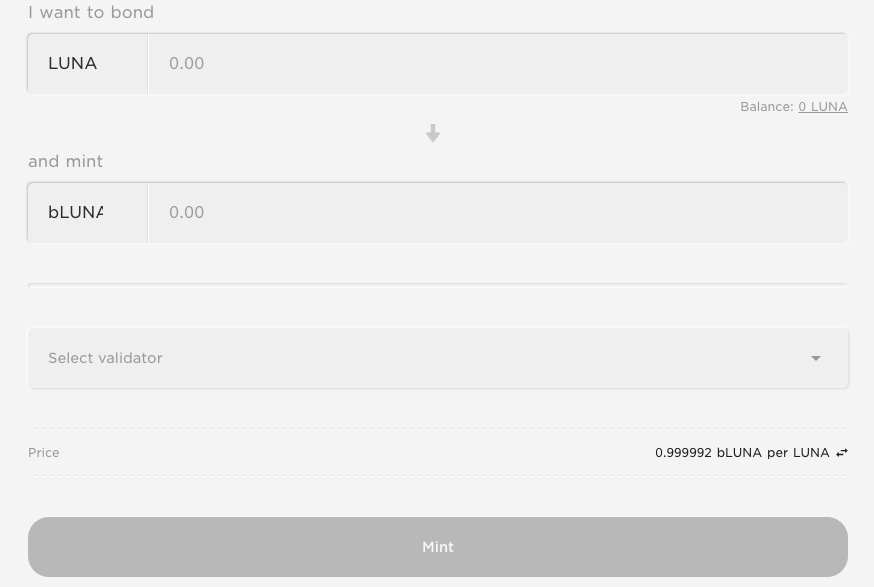 To do that, move over to the “Bond” tab and mint bLUNA. Simply enter the number of LUNA tokens you would like to use for minting bLUNA and select a validator whitelisted by the platform. Take great care while choosing the validator since the safety of your LUNA tokens depends on it. Once done, click on the “Mint” button. This would open a popup window where the Terra Station extension would confirm your transaction. Do that and you would have some bLUNA tokens with you. You can now use these tokens to borrow UST to deposit and earn a yield.

The benefit of doing this is even if the prices of LUNA rise, you would only have to return a fixed amount of UST. On the flip side, if LUNA falls and the value of the collateral dips below what you borrowed, Anchor would have no choice but to sell bLUNA tokens at a lower price to cover the deficit.

How to get ANC Tokens?

One of the most exciting parts of being a part of the decentralized platforms is the ability to directly influence the platform. And for that, you need to have governance tokens. For the Anchor platform, this happens to be the ANC tokens.

You could easily procure ANC tokens the same way you’ve procured UST tokens. Hop over to KuCoin or any other exchange that provides it.

Alternatively, you could buy some on the Anchor platform against your UST tokens. To do that, hop over to the “Govern” tab and click on “Trade ANC”.

Doing so would take you to a screen similar to the one you can see in the screenshot below. Out here, you can fill out the amount of UST tokens you intend to use to get ANC tokens. Click on the “Proceed” button once you’re ready and confirm your transaction in the Terra Station extension popup window. 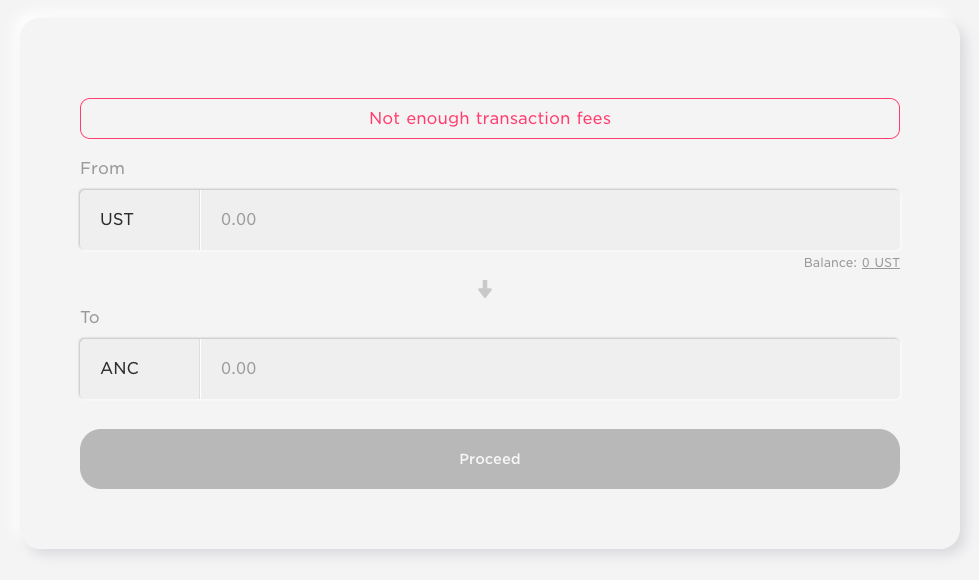 You would now have some ANC tokens that you can stake to participate in governance votings and rewards. That said, you must keep in mind that staking ANC wouldn’t give you a good yield (just 5-7% compared with the almost 20% you get from depositing UST).

If you instead take some UST and ANC tokens and use them in the ANC-UST liquidity pool, you stand to benefit more from the 40% APR this liquidity pool provides. It is worth noting here that the profitability will keep changing due to the volatility of ANC.

The Anchor platform is a much-needed stable savings solution in the DeFi space. In this article, we tried to cover how you can earn some passive income with it. That said, I would strongly urge you to go to the platform and read through the resources present out there.

Since the platform is relatively new, there isn’t much that can be said about how it would turn out to be in a year or so (which is when most people would be withdrawing their investments). So, it is difficult to say that it is the right platform for you.

By the looks of it, the platform seems quite promising given how they’ve survived a major market crash mostly unharmed. But if they would actually be able to maintain this is something only time will tell.

Till then, do your research, and if you find Anchor safe enough for investing, put your money in using the methods we’ve discussed in this article.